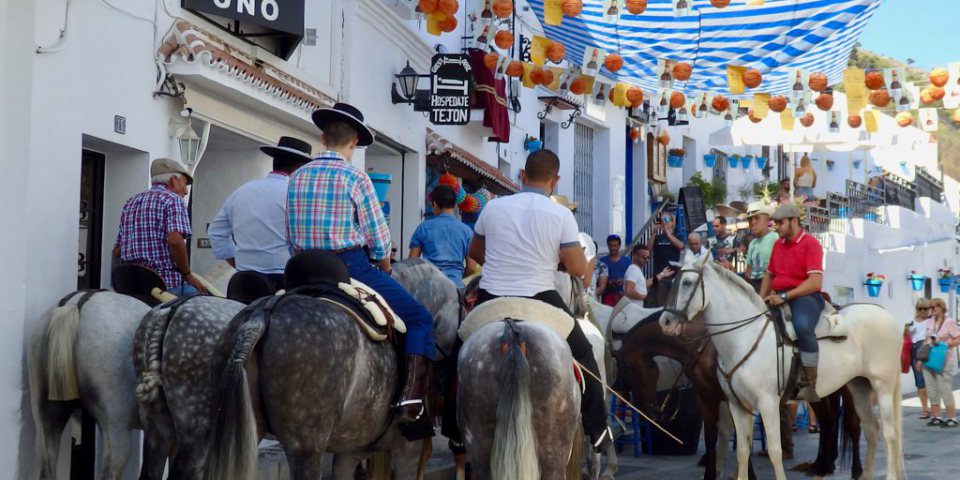 Culture and nature go hand in hand in Andalusia. Ideal for whom are looking for a lovely holiday destination. The area has a rich history and a lively culture which provides everyone with something of their choice.

Well known are the Andalusian whitewashed mountain villages. The small alleys with stairs and coloured flowerpots which are in beautiful contrast with the white walls, you often find on photos.

Alone in the Málaga province, there are several whitewashed villages in all sorts and sizes. You have the touristic villages, such as Mijas Pueblo and Frigiliana, which are lively villages with restaurants, souvenir stalls and little shops. There are authentic whitewashed villages, where the clock seems to stand still, for example, Álora and Cártama, staying close to Finca Las Nuevas.

Especially in the morning, you can enjoy real Spanish culture. Go to a restaurant or set yourself at a terrace to treat yourself with a typical Spanish breakfast (coffee, toast with olive oil and tomato and an orange juice), you won’t get bored. The Spanish like company and often start their day with a meet up with friends outdoors at a terrace.

Would you like to go back to the time where culture has started? Nearby you can descend in a cave where you can admire the oldest murals in the world. Made by the Neanderthals.

In the other direction of Finca Las Nuevas, you can visit giant dolmens, which were built more than 5000 years ago and which are on the UNESCO World Heritage List.

Andalusia is inseparable with Moorish culture. These influences you will find in the whole region. For example the fortresses of Álora, Fuengirola and the Alcazaba in Málaga.

The Bobastro, close by the famous King’s Path, Caminito del Rey, is a unique Moorish heritage. Besides remains of a settlement, you can admire the ruins of a rock carved Church. 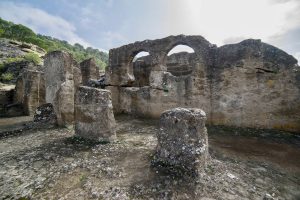 Would you like to experience the Moorish culture in a relaxed way… Then you can visit a bathhouse in Moorish style in Málaga. Here you can float around in candlelight pools. 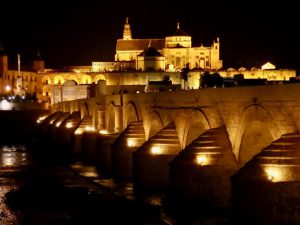 Is culture your main reason to holiday in Andalusia? Then you can’t skip a visit to the cultural cities Córdoba, Granada and Sevilla.

Córdoba is well known for its Mezquita. A giant mosque with dozens of arches and domes, which is in later times converted into a cathedral. Other beautiful sights are a Moorish palace and a Roman bridge which gives you a good view of the city, especially at night.

In case you are in Córdoba beginning of May, we can recommend visiting the courtyards, which are exclusively opened to admire the hundreds of colourful geraniums. Absolutely lovely.

Thinking of Granada is thinking of the Alhambra. An impressive huge palace from the Moorish times with the snowy mountain tops of the Sierra Nevada in wintertime. You can easily spend hours at the Alhambra, but don’t forget to buy your entrance ticket in time.

Besides the beautiful palace are the gardens and fortress also worth a visit. Granada’s city centre resembles an African souk, where you find your way through small alleys with shops on both sides.

Sevilla is like Granada a student city and radiates a friendly atmosphere. The cultural toppers of Sevilla are the Real Alcázar, the Royal Palace in a fabulous Moorish style. The Plaza España, a huge half-round square with an impressive pavilion which was built on the occasion of the world exhibition of 1929. Spain would not be Spain without having a huge cathedral.

The modern architecture you can find at the Metropol Parasol, a gigantic building from which you have a magnificent view of the city.

Besides architecture Sevilla is known for another kind of culture; the flamenco. Where ever you go, you will encounter the flamenco dance. Attending a flamenco show should be on your list. An easy and fun way to see the highlights of the city is a biking tour with a guide. We enjoyed the tour of Pia Tours. 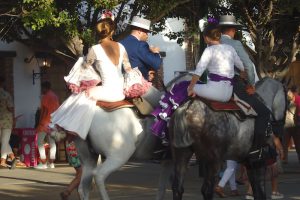 Like mentioned before, the Spanish love to meet up. A party, well say parties may not lack at Spanish culture. And that won’t happen. The Spanish are genius in finding a reason which has to celebrate with a party. Most reasons have to do something with their Catholic faith. There is always a day of a saint. The day can start with a church mass, but soon it runs out into a big folk festival with music, sing and dance.

In the summertime, every village has its own yearly village party. This is being tackled on a grand scale and is seen as very important. holidays are saved for this occasion, flamenco dresses are being bought and the party which takes for a couple of days is ready to start. Often you see horses and carriages at the party area.

In August the city of Málaga celebrates its feria for more than a week. During the day the city centre is packed with partygoers and there are performances of music and dancing groups. During the evening the party moves to the other area in the city, where each surrounding municipal, club or association has its own ‘ casita’ (hall). Here you’ll always find music, dance, food and drinks.

By the way, visiting this area during the day is also nice, because that is the time you will see riders and amazons in traditional dresses and carriages riding around. 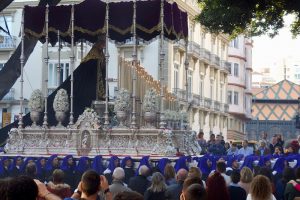 Are you visiting Andalusia the week before Easter? Then you will come across the Semana Santa sooner or later. This holy week is like the yearly feria, a very important event for many Andalusians. The whole week, sometimes day and night, processions roam the streets of villages and cities.

The Semana Santa is celebrated greatly in the city of Málaga. In the city centre stands are placed, roads are blocked and the city welcomes thousands of visitants. Every brotherhood, who is affiliated to a certain church, carries a throne with a statue of a saint. To give you an idea; sometimes more than two hundred men are needed to carry the very heavy throne of a few thousands of kilos around the city which takes sometimes more than five hours. Prior to the Semana Santa the brotherhoods train a long time to walk with a throne.

Besides the throne penitents join, people in colourful robes with on their head a high pointed head that covers their faces totally. These caripotes, date from the time of the Spanish Inquisition and would help the penitents to come closer to god.

A special experience also if you are not religious.

Do you know how you can experience Spanish culture very well? Just enjoy some food in a restaurant! Spain has a rich kitchen with many regional dishes.

Eating tapas is something we all know. But did you know that a tapa used to be, and to be honest still is meant as a small snack with a drink? Tapa means lit and used to be placed upon your glass with a small snack on top. Nowadays you can make a full diner with tapas. On the menu in a restaurant next to the dish, it is stated tapa or ración. If you order a tapa, you will get a small bite, with a ración it is a bigger portion.

The Spanish love to share food together, that’s why you are more than welcome to order a couple of raciónes and tapas and share it with your party.

Torremolinos, but then different
18 November 2022