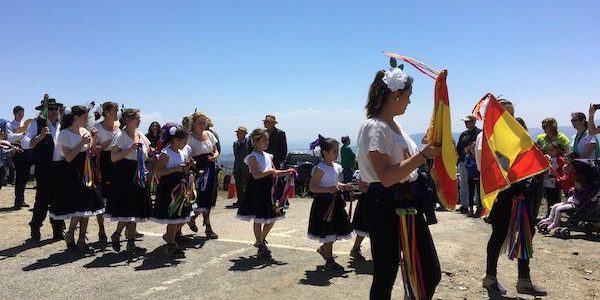 Verdiales is an ancient music festival with its origin in the inland of Andalusia, in the regions of Axarquía, Valle de Guadalhorce and Montes de Málaga. Maybe not well known, but if you are in the area absolutely a must-see.

We don’t have to go far for this ancient festival. the Verdiales is held at the Ermita de las tres Cruces, a nice 2,5k walk from our place Finca Las Nuevas. The festival is every year, on the first Sunday of May.

Ermita de las tres Cruces dates back to 1722 and is the oldest place where the Verdiales takes place. Originally Saturnian rites as the solstices were held here. 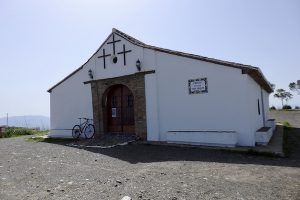 Verdiales with beautiful view on Málaga

Every first Sunday of May at 10 am, the flags of the villages are hoisted at the church. This is the start of the Verdialews. The music group, pandas, start with a traditional serenade in front of the church door.

After that, the group of musicians and dancers make their way to a tent where a performance takes place. Of course, there are some Spanish delights as paella for the audience.

Although this is an ancient festival, it is also a meet up for our neighbours. That is why we are there every year as well. 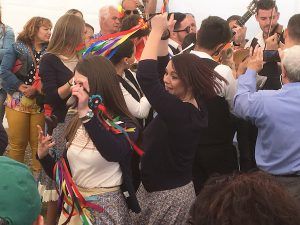 The history of Verdiales

This music festival has a farmer’s origin. It is a kind of singing and dancing fandango which is guided by an orchestra. A fandango is a dance style in 3/4 beat which was originally sung, but over time often pure musically performed.

The Panda, like the group of people performing the Verdiales is called, consists of the following instruments; 1 violin, 2 to 4 guitars, 1 tambourine, various cymbals, multiple castanets and sometimes a lute or bandurria. In front of the group the mayor or alderman walks with a lifted stick in his hand. He points out the singer and also starts and finishes the piece of music. Next to the mayor, a flag bearer holds the Andalusian flag or a sculpture of the patron saint of the area.

In the older days, the group also made themselves heard by a seashell decorated with colourful ribbons when arriving at the farmer settlements. Nowadays the dancers wear ribbons on their castanets.

Each region has its own style with its own interpretations. That is why there are 3 styles, known as Almojía-style, Comares style or Los montes-style. 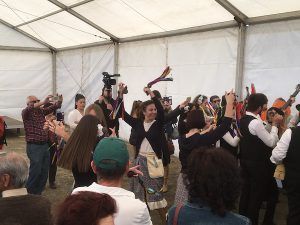 Would you like to experience this unique Andalusian cultural heritage, why not stay at Finca Las Nuevas, a century-old olive farm in the mountains of Álora. 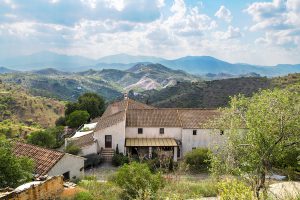