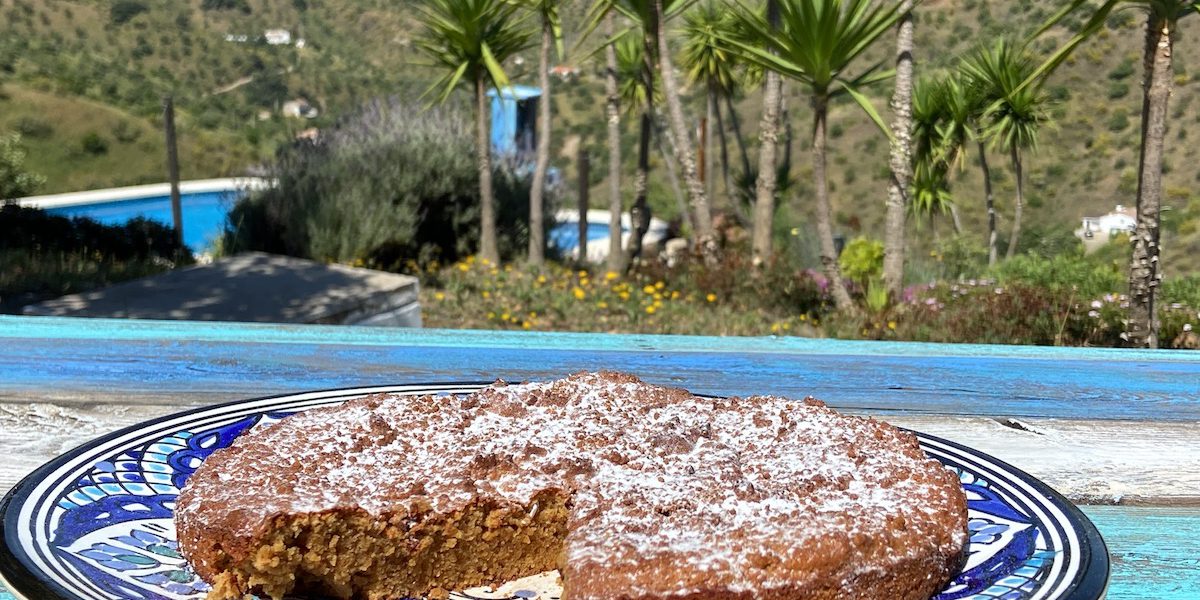 There is a huge variety of Spanish dishes and they are loved by many. The Mediterranean kitchen is well known for its healthy food. Though we are making a little sidestep to the Northwest of Spain and to a sweet treat.

At our little mountain grow many almond trees. Last year we have harvested the almonds (here you can see the video we made). What is better than using our own harvest for something delicious. A Spanish friend gave us a recipe for Tarta de Santiago.

This almond cake from Galicia has been made since the Middle Ages. This is quite surprising as there are not many almond trees in Galicia. Maybe the pilgrims brought them on their pilgrimage to the Galician Santiago de Compostela. I like to believe, that the farmers picked the almonds at our mountain of Finca Las Nuevas and transported them by mules to Málaga where they gave them to the monks. Who on their turn took the almonds on their pilgrimage via the Camino de Compostela and gave them as a present to the monks of Santiago de Compostela…

…But that is my guess.

The fact is, that many pilgrims had a craving for something delicious after having walked for weeks arriving in Santiago de Compostela. Another guess would be, that a dish with almonds would be a very special treat and perhaps only available for the rich.

Spanish treat in the history

The Torta de Santiago, as the cake is called in Galicia, is served as a dessert.

The first written information about this cake dates back to 1577.  Luis Bartolomé mentioned the recipe for the cake in his pastry book in 1838. Since then all the recipe books about Galician desserts contain it. The many pilgrims helped this Spanish treat into the world. The top of this Spanish almond cake is decorated with powdered sugar with an imprint of the cross of Saint James (Cruz de Santiago) which gives the pastry its name.

In 2010 the European Union gave the Tarta de Santiago the PGI status. PGI stands for Protected Geographical Indication. So I can’t give the cake an Andalusian touch, but the pastry is too good, not to share. 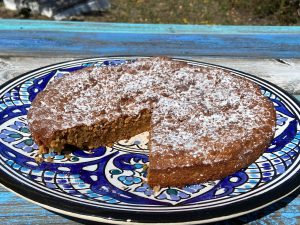 butter/oil to grease the mould

a baking mould of 22cm

1. Place the almond flour and sugar in a large bowl.

2. Add one egg at a time, after the previous one is mixed well.

3. The mixture will be smooth by now. You can add the lemon zest and stir it again.

4. Grease the mould and pour the mixture into the mould.

5. If you don’t want to decorate your cake with powdered sugar after baking, add some cane sugar on top of the dough before you put the mould in the oven.

6. Bake for about 30 minutes at 180 degrees.  When the cake is cooled down a bit, you can decorate the cake with powdered sugar.

Pick your own almonds!